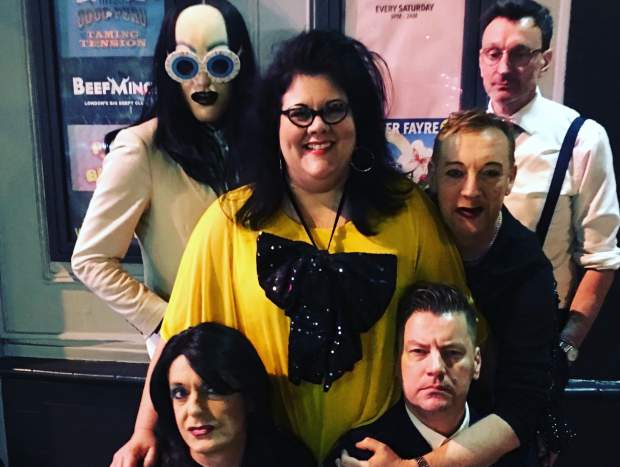 Duckie are a group of veteran LGBTQ club runners that emerged out of the wasteland of south London’s Vauxhall a quarter of a century ago. Renowned for its mix of progressive pub rock by DJs Readers Wifes with arty, provocative short stage shows introduced by its indefatigable toastess Amy Lamé, and socially flanked by notorious doorwhores The Cloths, it has run every Saturday night at Royal Vauxhall Tavern for the past 25 years.

When it’s ambition prompted an upgrade from skating around on a drunken dancefloor covered in broken glass at 2am, it started to take itself seriously as a legitimate arts company and developed a programme of unusual events, inventive large scale clubnights and ambitious interactive theatre shows.

After winning an Olivier Award for its globe-trotting hit show ‘C’est Duckie!’ in the noughties, it produced a series of participatory performance shows such as the sleepover Lullaby, the dinner-tainment immersive role play The Class Club and a variety of unusual spectacles that blended cabaret, live art, dancing and audience interaction.

As well as operating a side hustle in LGBTQ history and heritage events that recreate and pay homage to Georgian, Victorian and early and mid 20th century underground queer subcultures, each summer Duckie produce their annual festival of homosexual misery Gay Shame as a lippy, arty alternative to the established Gay Pride festivities.

In the twenty-tens, Duckie broadened its reach and began to develop new models of community theatre that targeted an audience outside of its core LGBTQ base. Specialising in popular forms arts and variety for working class subcultures it has produced a programme of socially engaged clubs that generate a healthy arts and cultural scene for communities outside of the mainstream, or on the so-called ‘margins’.

With support from the Arts Council and the National Lottery we have a portfolio of successful ongoing projects including The Posh Club, The Slaughterhouse Club, Snowflake, PC☆DC and QTIBPOC Creatives.

Aided by a full-time staff team of 4, a part-time weekly staff team of 16, dozens of freelance artists and an army of volunteers, Duckie produce about 130 events and about 130 workshops each year and are always developing new models of mixed community arts projects.

But mainly we just want to have fun. And a bit of a dance.

‘Duckie are not just rogueish pranksters, but chroniclers of the sickness at the heart of 21st-century life.'
The Guardian