The Palace of Varieties 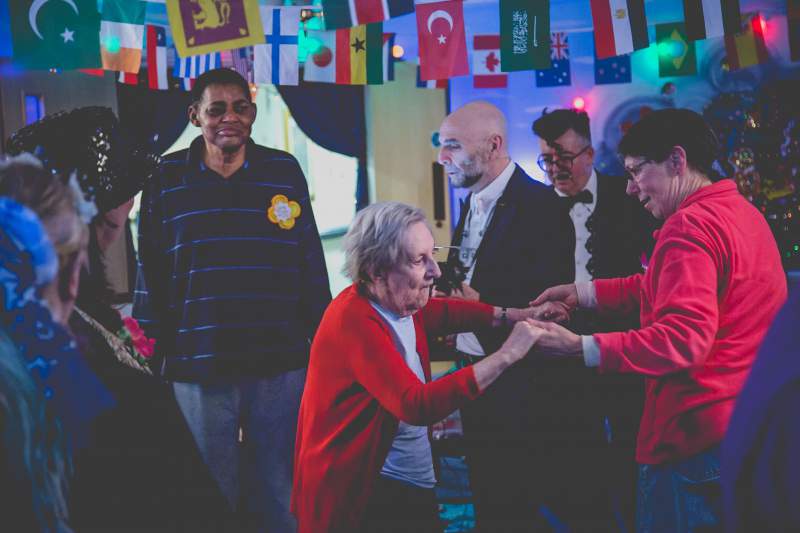 Intergenerational work and play has long been on Duckie’s agenda, most recently at The Posh Club parties for “swanky senior citizens, elegant elders and glamorous golden girls.” But there is another community – older still, and often infirm or suffering from dementia - in arguably even greater need for connection, because they cannot leave the confines of their home. So, Duckie must go to them – which heralded a new era of The Palace Of Varieties, at Waterside Care Home in Peckham over ten weeks in autumn 2016.

The introduction was made by intergenerational arts charity Magic Me, which asked four companies - Punch Drunk Theatre, UpSwing Circus, performance artiste Lois Weaver and Duckie - to host residencies in a London care home. Duckie was allocated Waterside, home to 26 residents, ages 69 to 95, with varying levels of dementia. Among the ways to engage the aspect of ageing and memory by way of art, entertainment and conversation, the team chose to host a party-cum-cabaret, much like its own Saturday night institution at the RVT.

Team leader was Robin Whitmore, a long-time resident of Duckie’s own multi-media arts care home, with able support from visual artists-showgirls Lucille Power and Sheila Ghelani, and a revolving cast of volunteers drawn to the Palace’s heady mix of social purpose and profound fun.

During basic training in Waterside, “to get to know the people who lived and worked there, what interested them and how we might best communicate with them,” says Robin, they heard several residents who’d lived in the Peckham/Camberwell vicinity speak fondly of the original Palace of Varieties on Denmark Hill, a striking music hall (and later, a pioneering cinema and a repertory theatre, and in its twilight years, a house of burlesque!) that ran from 1899 to 1956. “The way they described the festivities and community spirit sounded like a night at the Royal Vauxhall Tavern!”

But just as importantly, there were ‘making’ days on each Thursday, creating art for the walls, and decorations, for the party the following afternoon. Though reminiscing about the past is a recommended approach with dementia, Robin wanted the residents to be, “active participants in making art and appreciating music rather than passive consumers, to breathe life and a sense of magic into their home, and to leave a legacy at the end of the ten weeks.”

To this end, a drab room that was under-used as a spare dining room or for staff meetings was transformed by paint, into a vista of blue sky and white clouds surrounding ample white space to pin up artwork as it was made, to mirror that week’s theme. A party playlist of songs followed the same changing theme – which is where I came in. I’d wanted to do voluntary work with the elderly, and reading online about Duckie’s Waterside project, I’d got in touch. Alongside volunteers to generally assist, someone was specifically needed to organise the music – and as a music journalist, the role was like carrying coals to Newcastle.

But then came the hard part, to work with dementia; as Robin says, “to understand how to interact meaningfully with someone whose memory has fragmented, who may seem to inhabit a parallel reality. How treacherous the world must seem when words themselves become slippery - it’s not like you can have the usual conversations. And yet people really wanted to engage with us, to connect with life outside of themselves. Dementia makes that difficult but the impulse is still there.”

It was also vital that staff members got involved, giving them a different relationship to the residents that just routine care. So, they’d join in the Thursday sessions too, “quieter, more concentrated, involving one-to-one chat and careful work,” Robin recalls. “The pace could be slow and intense, with residents absorbed in the minutiae of making the simplest moves. Painting could be a matter of fascination, as if every movement of the brush was new. Communication was often half-formed sentences that resembled a poetic language. But marks on a page, threads of a song, globules of paint, it all helped expand the vocabulary.”

Few residents had drawn or painted since childhood, yet some seemed born to the task. One man who’d never had an art lesson at school had an innate sense of design, and was clearly proud of his work. One woman similarly lacking experience showed the subtlest understanding of colour, from years as a dressmaker. For a handful of Thursday sessions, local schoolchildren joined in (we also had a very popular dog visitor). “Among some beautiful moments,” Robin recalls, “one boy of 13 and a woman of 90 painted together for two hours, giggling and just enjoying each other’s company, and handwork. The boy couldn’t wait to come back and see his friend the next week.”

Surrounded by their art and decorations, each Friday party, the residents were entertained by music and film projections, but also guest artistes, both volunteers and professional, from a fire-eater to flapper girls, from violinists to pianists, from opera singers to raconteurs; each week, a new surprise. But at the same time, each week kept to a familiar, almost ritualised format, “like a TV gameshow, with catch phrases and theme tunes,” says Robin. “Where you got to know exactly what to expect but which allowed for different content.”

The new Palace of Varieties’ theme song was Frank Sinatra’s barnstorming version of Irving Berlin’s “Let’s Face the Music and Dance” - as in “There may be trouble ahead…” - a teasing warning that formed part of Robin’s spoken introduction, before lights were dimmed and the entertainment began. Residents, family members, staff and performers were encouraged to mingle, and dance; we also handed out lyric sheets for singalongs. As one of our most formative memories, and so one of the last things we forget, music can have an astonishing impact on dementia. Seeing one resident unable to converse but still mouth the words to a familiar song, or another who sat silent, his eyes permanently closed, suddenly stand up and move to the rhythm, was unforgettable. “This level of interaction was really important, as typically the residents move little, and spend most of the day dozing in front of daytime TV,” says Robin. “There was a lively buzz every Friday which grew from week to week.”

Our official residency at Waterside is over, but the enormous impact on everyone involved is clear, not least the permanent artwork on the walls, such as ‘rockpools’ from seashells, paint and glitter for Palace of Varieties Goes to the Seaside, a vivid riot of colour and texture and a reminder of a unique collaborative moment in time. A group of us are helping Waterside’s activities co-ordinator to continue a scaled-down party, to keep the Varieties alive. But her workload is full-on, so potential volunteers, please get in touch. Time to face the music again and dance…