Marita Wild bowls up in an 'old red Ferrari' 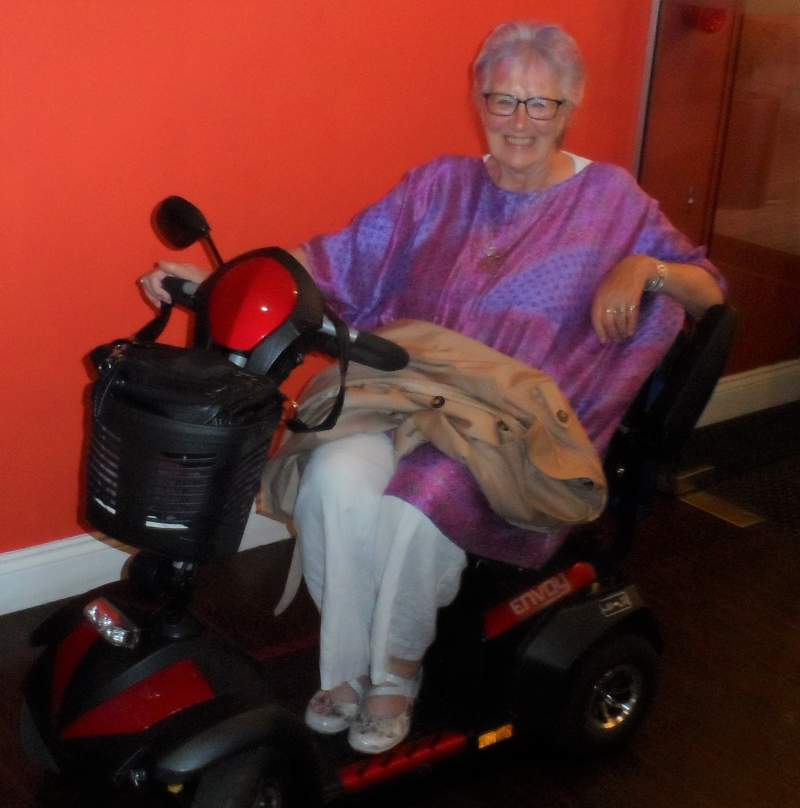 It’s Friday morning, I’ m showered and dressed in my poshest clothes; which to be honest are not all that posh. Posh isn’t me. Still you have to make an effort if you’re going to somewhere like the Posh Club don’t you? At a quarter to twelve I rev up Gertie, my old red Ferrari, and set off at top speed (four miles an hour) for Ralli Hall─ Gertie is my mobility scooter, but it’s more fun to think of her as a Ferrari.

Ralli Hall is an imposing building a few yards up the road from Hove Railway Station; and two men, who tell me their names are Robert and John, are standing in the hexagonal porch at the top of the steps in welcome . They are both wearing evening suits and bow ties; this is the Posh Club after all. John’s evening suit consists of a tuxedo and a kilt.

‘Nice skirt,’ I say, ‘Got anything on underneath?’
John laughs; he takes the hem of his kilt wafts it provocatively and gives a twirl, ‘Like to take a look?’
‘Nah,’ I tell him, ‘when you’ve seen one you’ve ‘em seen all.’

My friend arrives tottering on high heels; looking like a movie star, all dressed up in a turquoise dress, her hair immaculately styled, and make up perfect.

‘You look lovely,’ I say, and we walk inside to pay our five pounds entrance fee and sign in before making our way into the big hall. One of the staff hangs my coat up and we look around at the sprinkling of sixty plus men surrounded by women in their poshest outfits sipping cups of tea and chatting with the odd transvestite and a few lesbians who are holding hands and looking into one another’s eyes. A handful of gay men are doing the same. This club is for everyone whatever their creed, colour, or sexual orientation.

‘If you’re looking for a man to romance you’re in the wrong place here,’ I laugh to my friend. She grins and we are shown to our table by our hostess Becca who I must say is looking very fetching in the feminine equivalent of male evening dress; complete with frilled shirt and bow tie. The table we are shown to is already loaded with pots of strawberry jam and cream, china tea cups and saucers. We are served with tea by a young waiter who has a flower stuck in his hair and we introduce ourselves to the other people at the table. Most of them are here with friends, though Joyce, an older woman in her eighties, is here alone.

A crocodile of waiters in striped waistcoats and waitresses in frilly white aprons, each of them holding a two- tiered cake- stand piled high with various goodies winds its way around the tables. “Tea for Two” resonates from the loudspeakers and everyone is clapping and cheering in obvious enjoyment. A cake stand is put on our table and a plate of sandwiches arrive , smoked salmon and cucumber, cheese and chutney, egg mayonnaise, tuna and whatever. We all tuck in, passing food around, pouring tea for one another, piling jam and cream on scones, laughing and joking while on the stage a fan dancer twines ostrich feathers around various parts of her anatomy.

I look around and think how good it is to see older people enjoying themselves. There may be some who talk condescendingly about the do-gooders who believe that this kind of thing is what old people enjoy. But so what? At least the elderly aren’t staring at a TV screen killing time in God’s waiting room before banging on heaven’s gate but instead are happily looking forwards to the afternoon’s entertainment.

After the tea things have been cleared away we are served with a glass of sparkling Prosecco, and Alfie, our M C; all blond hair and sinuous silver sequins, introduces the next act which just happens to be─ wait for it─ a man in sunglasses who sings a variety of Elvis songs interspersed with witticisms. At the end of his act he removes his sunglasses, and to cheers and whistles, reveals that he must be the only Chinese Elvis in the stratosphere.

Then the dancing begins and some of the women at our table get up to dance. One of them, Joyce, is small and as thin as a lightning rod. When she dances to Elvis Presley’s, “All Shook Up,” she does high kicks and bends backwards so that her head nearly touches her bottom, apparently she practises kick-boxing, which I can well believe, though it must be said that short dresses and scrawny knees aren’t the most attractive spectacle while performing high kicks! What a joy to see older people who are fit enough to kick up their heels in dance while others sit at the table swaying to the music and clapping to the beat.

I look up from talking to my friend and Alfie is back on the stage pulling raffle tickets out of a box and dancing around as he shouts the numbers out. When the prizes have been won and the raffle is over the dancing begins again and Simon the producer stops by our table. I understand that Simon started the club after his father died. He started it for his mother because he was worried about her being lonely, he says. I don’t know the full details, but I imagine a few friends, high tea and champagne and maybe a paid entertainer in the front room of their home. Now there are Posh Clubs in Hackney, and Crawley, and maybe in Hove too; if we are lucky, if Simon can get the funding.

Most of the entertainers, and the staff are volunteers, he tells me, “It’s good of them to do it,” he says. He’s a nice man Simon, and a lovely dancer.
‘You should have been on the stage,’ I tell him.
‘What makes you think I wasn’t?’ he jokes.
My friend has gone home, so I talk to Joyce, We sit and watch the dancers, or rather I watch, and Joyce dances, in between we talk and laugh. During the course of the evening it emerges that Joyce is eighty-five years old, and not only is she a kick-boxer, but she is also a qualified nutritionist with a PHD from Oxford University.

Then, alas, it is time for the fun to end as a conga line of staff, entertainers, and oldies winds its way through the tables to the tune of “We Are Family”

That was my first visit, since then I have been at the Posh Club every Friday, it’s the best five pounds I have ever spent; the entertainment is awesome, the food is delicious, the staff couldn’t be more welcoming, and the atmosphere is electric; plus you meet some really interesting people and get to make new friends, which has to be a big bonus if you are lonely and live alone.

So to all you oldies kicking your heels up at Ralli Hall, I ask you to raise your glasses to the Posh Club:. I think the people who run it have got everything just right. The right amount of indulgence, the right amount of entertainment, the correct amount of pampering. The Posh Club has to be the best thing since God invented washing machines!

I’ll be revving Gertie up again next Friday to get to Ralli Hall and the Posh Club. Long may it reign!